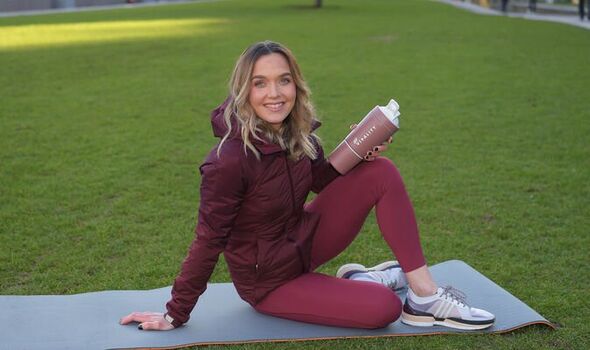 She says she has never felt better. “I went vegetarian the moment I retired from elite sport,” the 41-year-old said. “In a matter of months after that I decided to cut out all dairy and everything else because I felt I didn’t need it.

“It felt really rebellious because the idea of doing that as an athlete was absolutely no way back in the day.

“I was really kind of… I’m going to say ‘forced’ because ‘encourage’ wouldn’t quite be strong enough, to eat a lot of animal protein all the time to bulk up. So I was just basically eating a lot of food that I didn’t enjoy, but I had to because it was my job.

“I haven’t looked back since.”

Nutrition is vital to her, not just for her physical health, but for her mental health too. She has spoken candidly in the past of her struggles with depression after her abandoned 2018 expedition to climb Everest, when she experienced hypoxia due to lack of oxygen and had to go on courses of antibiotics.

“Energy slumps, feeling hungry and all that definitely affects your mood as well,” said Victoria, who is now backing new SlimFast Vitality, a plant-based version of the nutrition drink.

“I’m a firm believer [in that]. When I was feeling at my lowest I’d also taken a lot of antibiotics after being on Everest and actually it makes sense.

If you completely destroy your natural biome in your digestive system and you kill everything off, then you’re going to struggle to absorb the nutrients that you have in your food, get the best out of it, and it might help you feel flat and have a lack of energy. If you have no energy, or enthusiasm and you’re feeling a bit low it’s all going to add up and make you feel worse. I’m a big believer in that”

In a post-lockdown world, Victoria takes joy from growing vegetables in her garden, rather than climbing Everest or winning gold medals.

“During the first part of the lockdown, the first thing I did when they started panicking about having no food, what I did was I planted loads of vegetables in my greenhouse.

“I made sure that I planted loads and loads and I had a bounty of lovely things to eat. I ended up giving a lot of it away to neighbours because I over did it. I just ended up putting them out the front of my house with a help yourself box.”

Like many of us, she found that she exercised even more because “that was all there was to do”. Of course, physical activity has always been a big part of her life, but she hopes those who discovered healthy cooking, developed good exercise routines, and learned to love the outdoors during lockdown will maintain these habits into their normal lives.

“I think there are a lot of people out there that it was the first time in their lives they really considered their own health as a priority. “I think it has changed a lot of people’s opinions on how they look after themselves.

“I hope they [stick with it] I hope that people realise how good it made them feel in a very diabolical situation. That it brought them something positive and gave their bodies the chance to be the best version they can be. Who knows, only time will tell.”

Victoria is known for her drive and ambition. After her career in cycling, she completely pivoted to horse riding, and even managed to place fifth at the 2016 Foxhunter Chase, at Cheltenham. But what is next for her?

“I’m always looking for another challenge, for something audacious to do.

“[But] at the moment all my time is taken up with house hunting, which is really really boring, but that is my challenge and to be honest it’s enough right now.

“I’d love to do another physical challenge of some description but I’m just biding my time cooking vegan food, chilling out and riding my horses.”

Victoria Pendleton is supporting the launch of SlimFast Vitality shakes.

Packed with 23 vitamins and minerals and suitable for a vegan lifestyle, new SlimFast Vitality balanced nutrition shakes offer a quick hit of healthy that also pack a punch in taste. Visit Slimfast.co.uk or @slimfastvitalityuk for more information.