Home » Health & Diet » ‘I was out of control’: Woman drops a stone in six weeks with relaxed diet – ‘a lifesaver’ 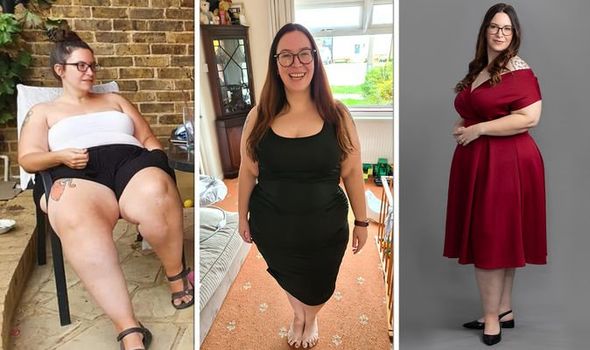 Charlotte, 32, is a mother of three who weighed 21 stone at her heaviest. She started gaining weight when she was 12 years old and has been calorie counting ever since. Thanks to an NHS weight loss plan she managed to lose weight without following a strict diet.

Charlotte explained: “My eating was out of control. I’d feel rubbish for putting on weight, then I would comfort eat and put on more weight. Then I’d start a restrictive diet that was ultimately unsustainable.

“I’d eat something they’d told me I shouldn’t, feel as though I’d failed, so then I’d start eating more again, and putting on weight. Then it would go round and round.”

She finally managed to lose weight by following a non-restrictive diet: the Second Nature programme.

“I’ve lost a stone in just six weeks and for the first time in my life, I don’t actually feel as though I’ve even had to try very hard – not like on restrictive diets where I’ve ended up feeling exhausted by this stage and have put in loads of effort.

“I feel in control of my eating, but not like when I was calorie counting, and I would have to analyse everything I would eat, and end up obsessing over it.”

Charlotte explained she was bullied over her weight when was a size 16.

She said: “I was picked on a bit by the other kids at school over my weight so I turned to food for comfort, which then made it worse. It’s been 16 years of yo-yo dieting and calorie counting.

“When I was aged 22, I fell pregnant and put on four stone, that was my heaviest at more than 21 stone.”

Charlotte admitted her eating habits made her feel “really unhealthy, it made me feel rubbish”.

The NHS weight loss programme provided Charlotte with healthy recipes, qualified nutritionists and coaches and by making a few tweaks to her daily diet, she was amazed to see she lost a stone in just six weeks.

She explained: “It sounds crazy now, but on other diet plans in the past, I was always told to go fat-free instead of full fat, especially with yoghurts.

“Now, I snack on nuts, which is a first, but they’re so nutritious, and I know I’m getting full.

“I’ll plan my week like the health coaches recommend we do, but if I wake up and don’t fancy porridge for breakfast, and want some wholemeal toast, I’ll have it.

“I might have it buttered or with scrambled eggs, and I don’t have to feel guilty about it. When I make a curry, I’ll add cream – and that’s allowed! I don’t have to panic about what I’m eating.”

Charlotte continued: “Before, with calorie counting and other diets, I would feel as though I’d failed and give it up, but with this plan, I don’t have to feel guilty.

“As a mum with three kids, I have such a busy lifestyle, so the recipes have been a lifesaver, and all the kids and my partner will eat them too.

“But now I’ve found the best way of eating for me, and I can see how wrong calorie counting really is, as it only ever focuses on what you’re eating.

“I just wish I’d found Second Nature sooner, as it teaches such good habits in terms of what you’re eating, and prevents the restrictive nature of calorie-counting, so if I’d known all these things, I wouldn’t have turned to comfort eating so much,” she said.