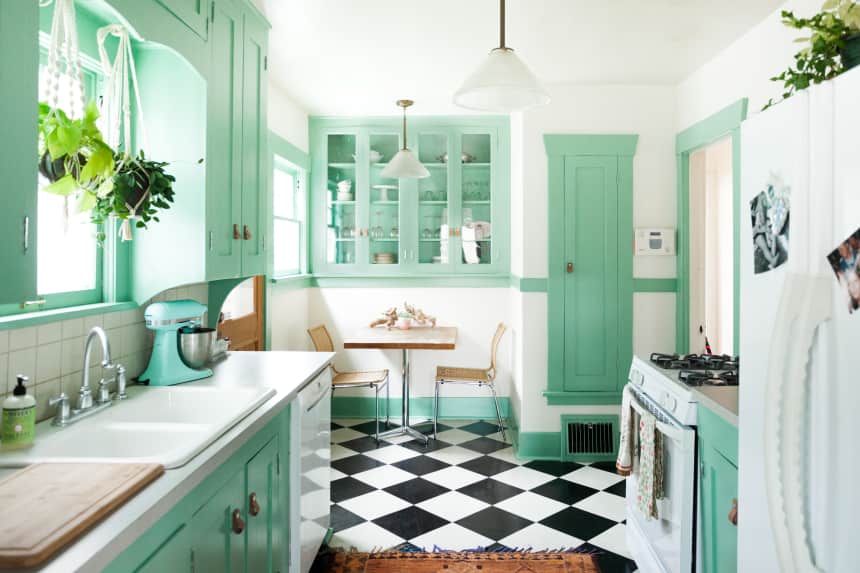 We live in Chicago in a charming old apartment that is very lovely and happy, with all its original features — including very, very old pipes. Upon moving in, our landlords expressly asked us to treat the old pipes with care, and to never ever pour Drano down the drain. At the time, it didn’t seem like a big deal. An easy promise to make, I thought.

But after living in the apartment for a few months, we noticed the drain on one side of the sink was getting very stinky and was in need of lots of care and attention.

Let me start by saying that whenever possible, we try to use natural methods to solve cleaning problems. We use a LOT of vinegar and baking soda in our house, but when push comes to clog and the drain gets stinky, I just want to use what is guaranteed to work quickly, and in the past it’s always been a bottle of Drano. Bound to honor our promise to our landlords, though, we decided to start researching ways we could take care of the problem — sans Drano.

We started with a “Homemade Drano” recipe I found online: Start by pouring a pot of boiling water down the drain. 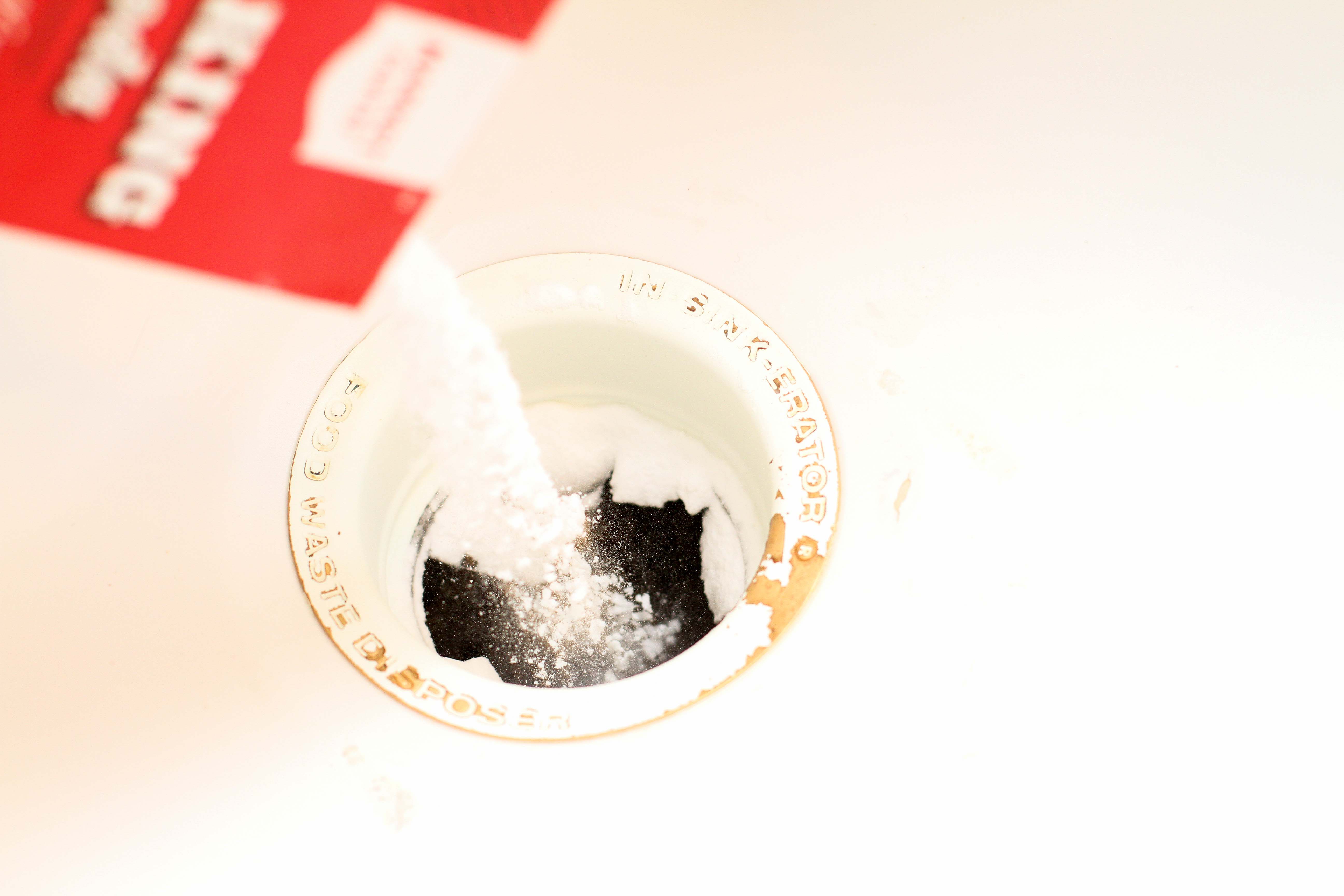 Then, sprinkle one cup of baking soda. 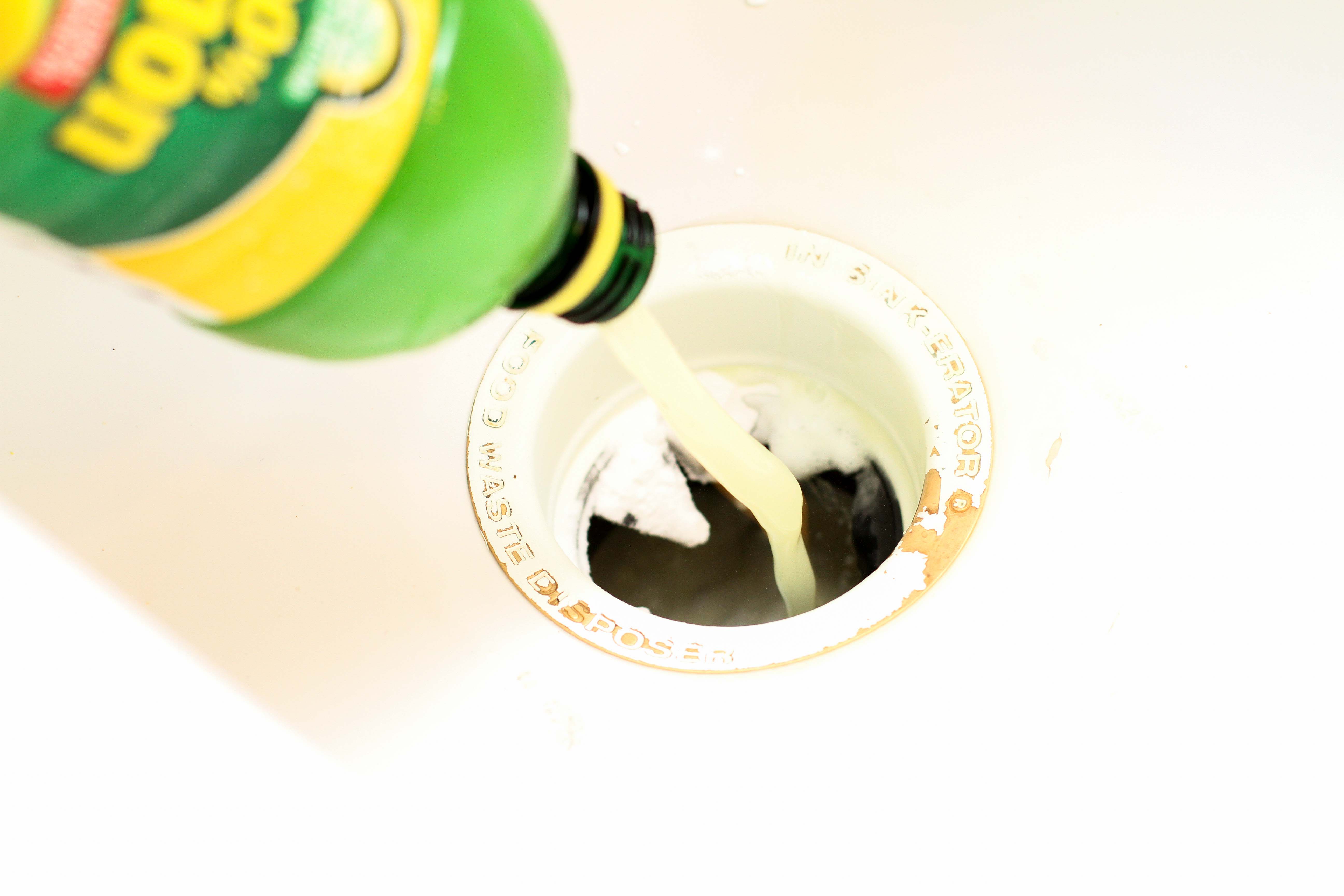 Follow it up with one cup of lemon juice. 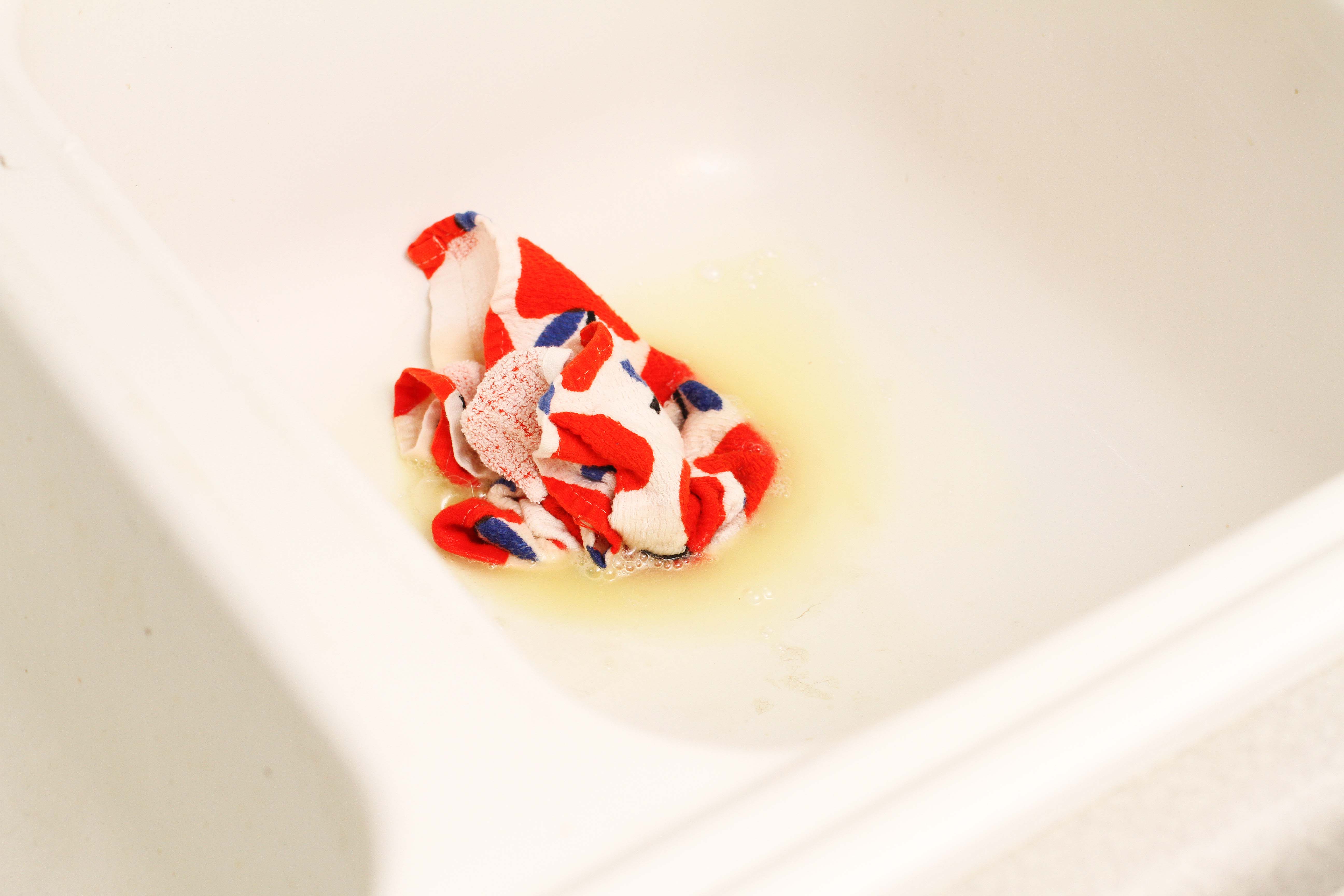 Then, quickly stuff a dish towel in the drain (to help build pressure) and let it sit for 30 minutes.

Bubbles immediately started to come up out of the drain on the other side of the sink, so we were encouraged! After 30 minutes, we removed the towel and poured more hot water down the drain. This brought up a lot of gross stuff that had been clogging the drain, but not all of it because the water was still draining very slowly. So we tried it again.

The second time, I dumped what was left of the original box of baking soda down the drain, plus the contents of another box, and about 10 ounces of lemon juice plus one quart of vinegar. I wasn’t messing around! I stuffed the towel in the drain and let it sit for about 20 minutes. The second pass helped significantly but our pipes were still draining slowly. The baking soda-acid combo was doing its job and getting things moving. It just wasn’t dissolving the gunk in the drain, so there it stayed, keeping the water moving at a slow pace. 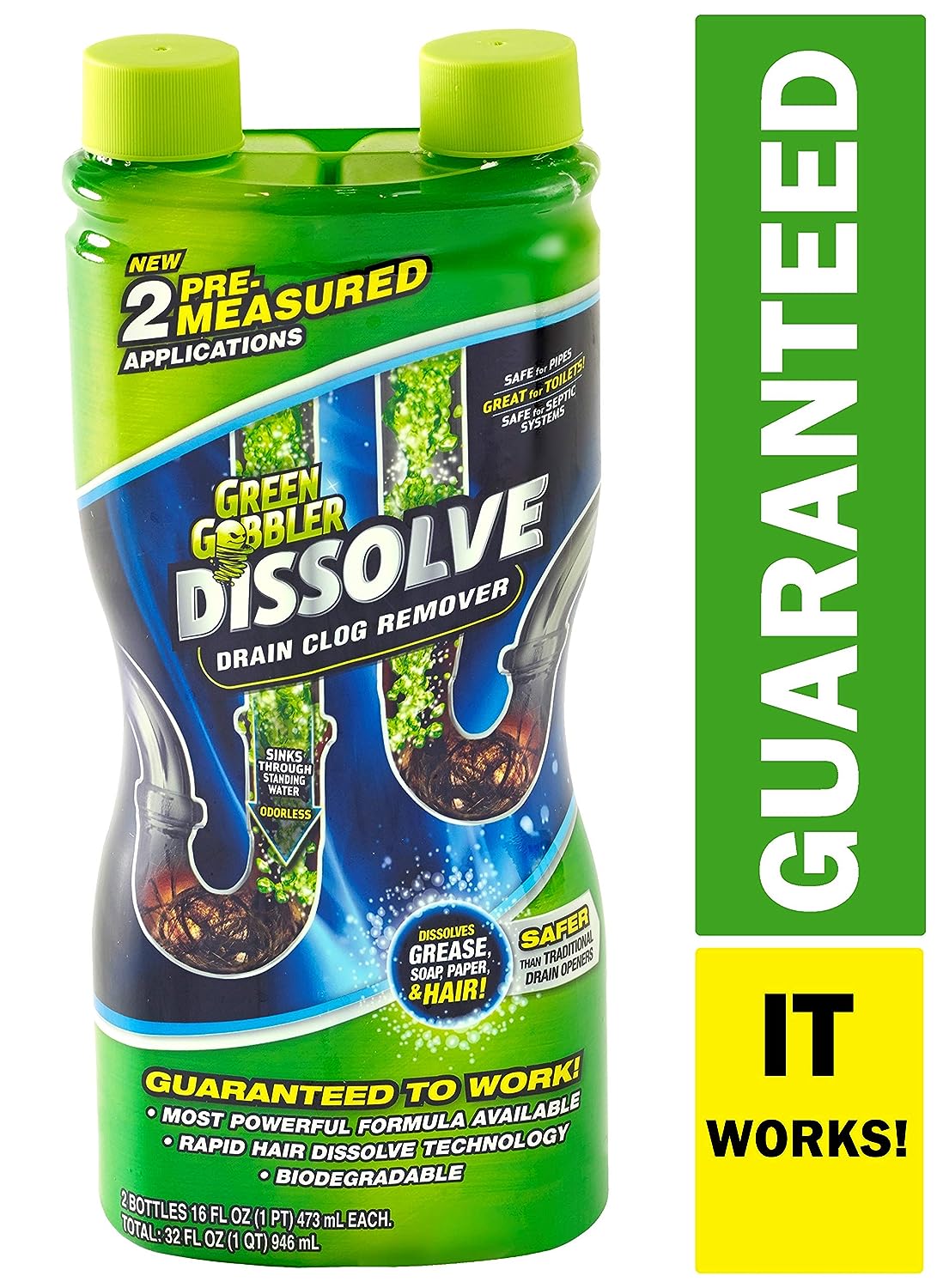 With a still-stinky, still-clogged drain, I decided to go the commercial route. I went in search of a product that came with a guarantee but was also safe for old pipes and the environment, and found a product called DISSOLVE from a company called Green Gobbler. It’s safe for all kinds of pipes and was actually rated #1 in chemical drain openers on Amazon — so I ordered some.

The container is split into two chambers and recommends you use just one side for sink clogs, both for toilet clogs. I opened one side, dumped it down the drain and waited 30 minutes. I followed up with boiling hot water and then, just like magic, the clog was gone! I cannot tell you how many times I turned the water on and let it run before I finally conceded that the clog was actually gone. 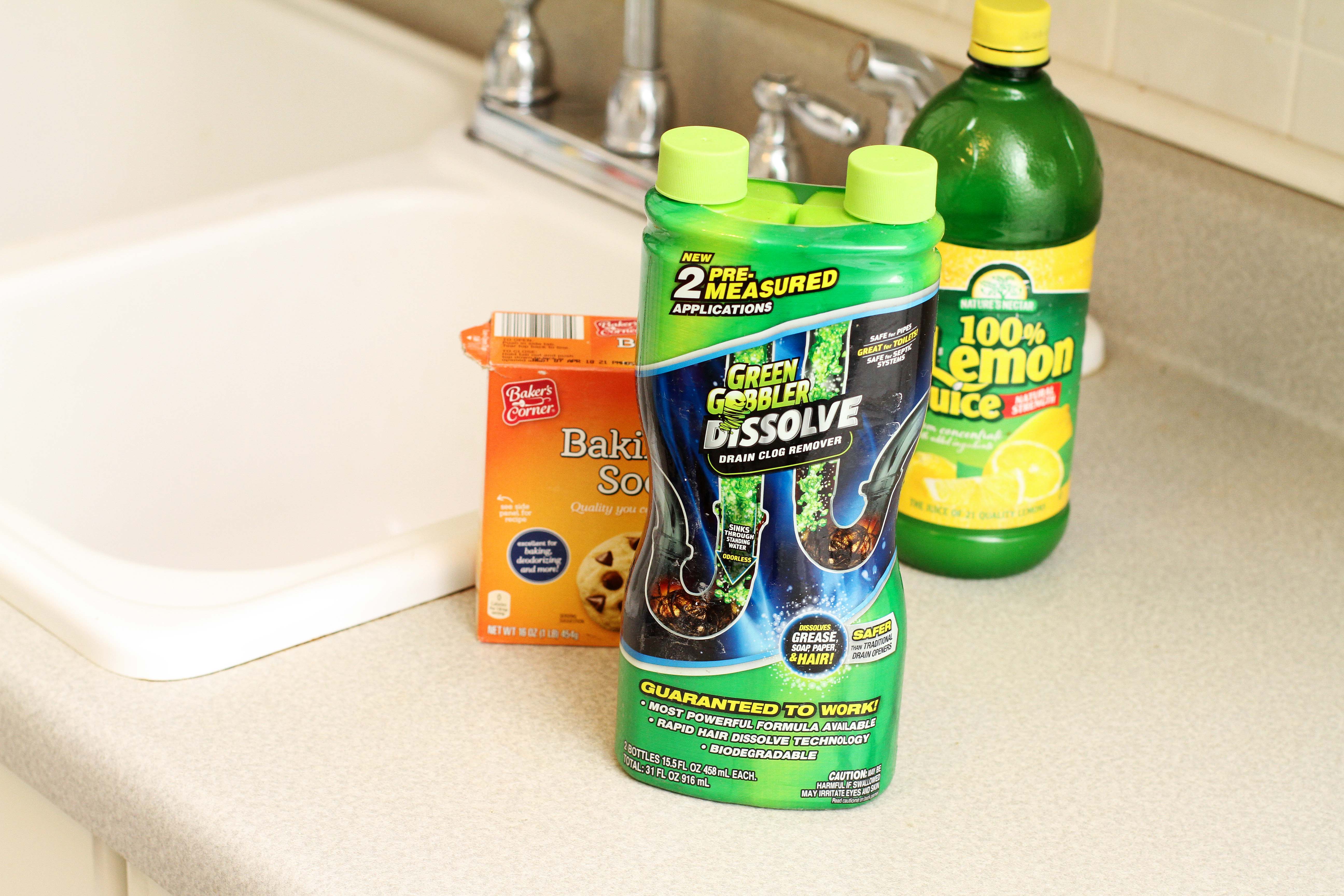 I was kind of bummed out my DIY method didn’t do the job, but filed it away to try on the bathroom sink the next time it clogs. The DIY method is perfect if you’ve got a slow drain that needs some persuading but if you have a huge clog and don’t want to mess around, check out the commercial product.

How do you deal with tough drain clogs? 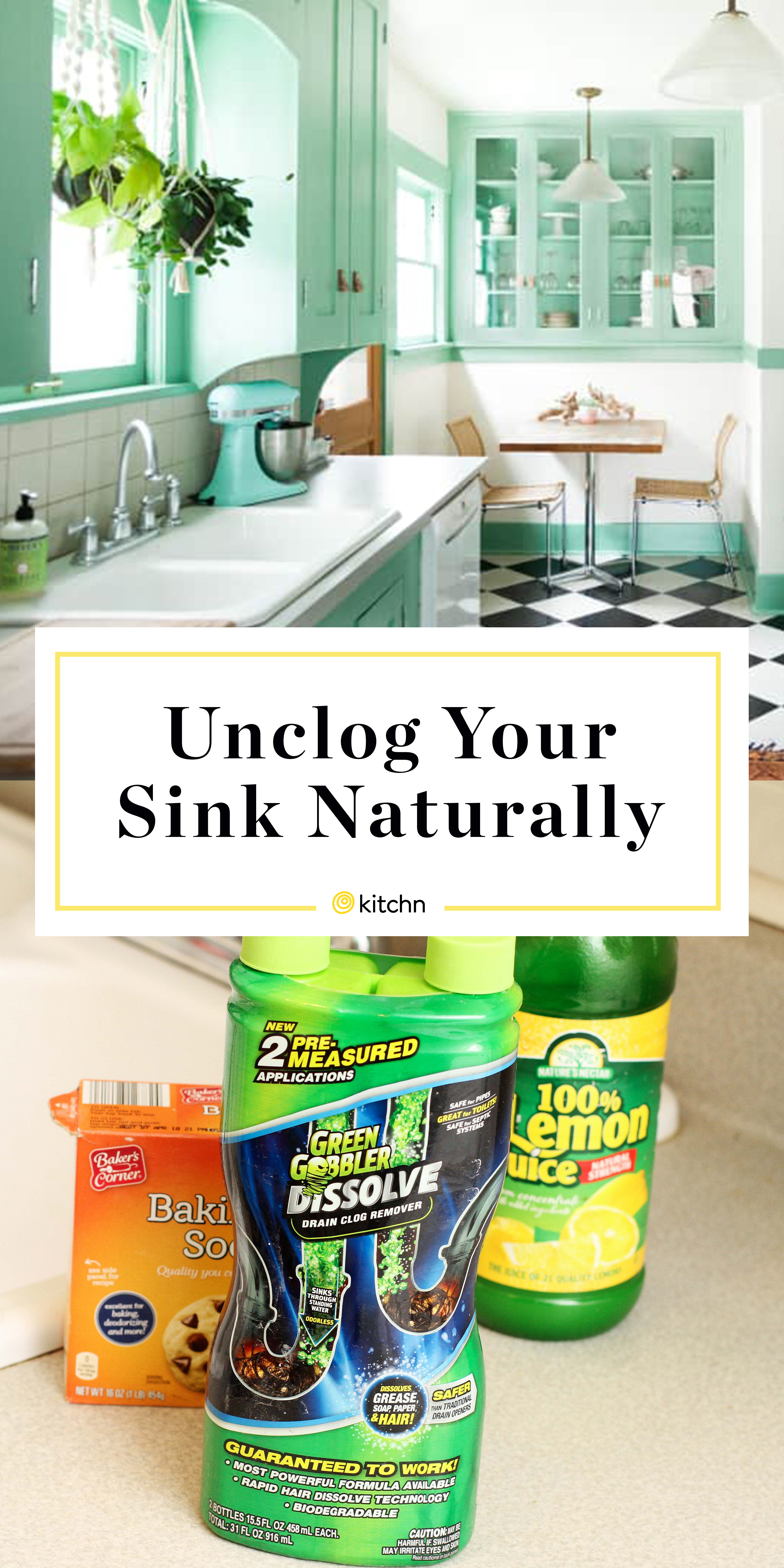