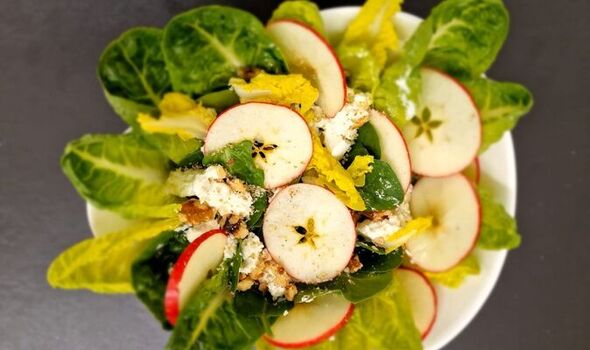 Having a fish curry, which combines both turmeric and oily fish, can create a powerful anti-inflammatory – while eating a banana together with yoghurt can improve your bone health and help with gut bacteria.

Olive oil helps the human body to absorb the vitamin A found in tomatoes and red peppers, which is required for healthy skin and eyes.

While black grapes, rich in polyphenol antioxidant catechin, help to prevent cardiovascular disease, cancer, and neurological disorders – and, together with onion, can inhibit blood clots and boost cardiovascular health.

Other health-boosting food combinations include garlic and honey – which can help with upper respiratory tract infections – and almonds and berries, which can help prevent heart disease.

But a study of 2,000 adults found one in five (21 percent) have little or no understanding of vitamins and minerals and their role within their body.

Rob Hobson, speaking on behalf of supplement brand Healthspan, which commissioned the research, said: “We thrive on synergies, and many of us create them in our lives without even knowing we are doing them.

“From a biological point of view, the body needs synergies to function properly.

“Food synergy is defined by the way in which certain foods and the nutrients they contain work together, to offer health benefits stronger than the individual foods alone.

“So, sometimes simply combining two items can supercharge the impact it has on your health.

“While the foods may have their own individual health benefits, this can be even greater when mixing them together, as they can help the other one to better do its job.

“Our diet is hugely important for our health, and paying more attention to what we eat, and how we combine foods, can be really beneficial.

“These can then be harnessed to target specific conditions, such as reducing inflammation, managing diabetes and heart disease, or dealing with symptoms of the menopause.”

The study also found 54 percent of adults are unaware that combining different foods can benefit their health, while 31 percent never think about mixing foods together to get more out of them.

Yet 54 percent think their diet is missing key vitamins or nutrients – with 39 percent blaming this on not knowing what vitamins and minerals are in different foods.

Another 36 percent put it down to not knowing what nutrients they need.

Vitamin D (38 percent), iron (33 percent) and vitamin C (31 percent) are among the nutrients people are most likely to think they are lacking.

As a result, over half of adults (56 percent) currently take a supplement, with 46 percent of those taking vitamin D and 35 percent consuming a general multivitamin.

But 44 percent make no effort to ensure they get the right amount of vitamins every day – despite 80 percent believing someone’s health can be managed by what they eat.

It also emerged people believed a lack of vitamins and minerals had left 46 percent suffering with a health issue.

Although just one in three (32 percent) of those polled, via OnePoll, are confident they would know the signs they are deficient in certain vitamins and minerals.

Dr Sarah Brewer, a medical director working with Healthspan, said: “Food should always be first, but cleverly combining combinations of vitamins and minerals in supplements can also play a role in supporting our health.”

10 SUPER MEALS TO IMPROVE YOUR HEALTH WITH FOOD SYNERGY, ACCORDING TO ROB HOBSON:

4. Breakfast smoothie made with probiotic yoghurt and banana