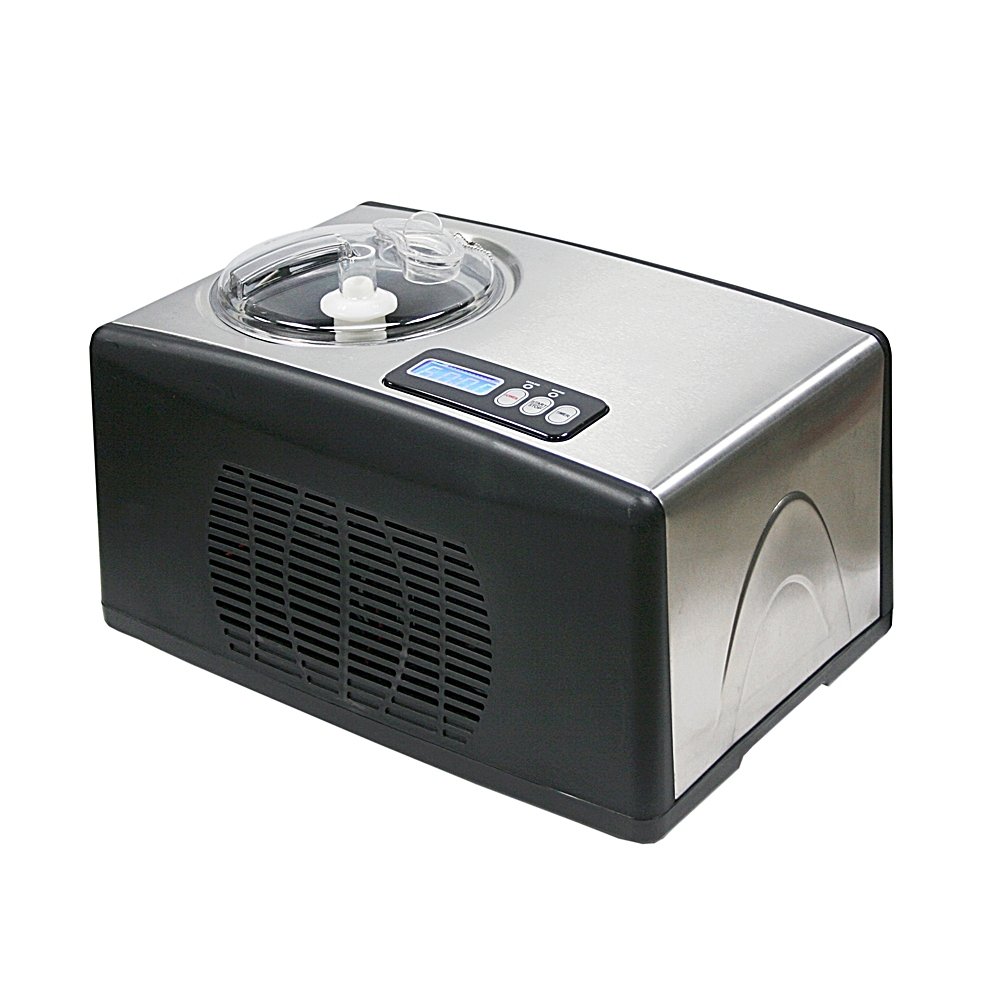 The Best Ice Cream Maker, According to Wirecutter

Not really a name brand most of us are familiar with, Wirecutter says the Whynter machine is the best for consistently great homemade ice cream. It’s pretty pricey (because it’s self-refrigerating), but the editors say it’ll get more play than cheaper machines. It’s incredibly easy to use and scoop from. And it churns out ice cream that is unbeatably smooth. 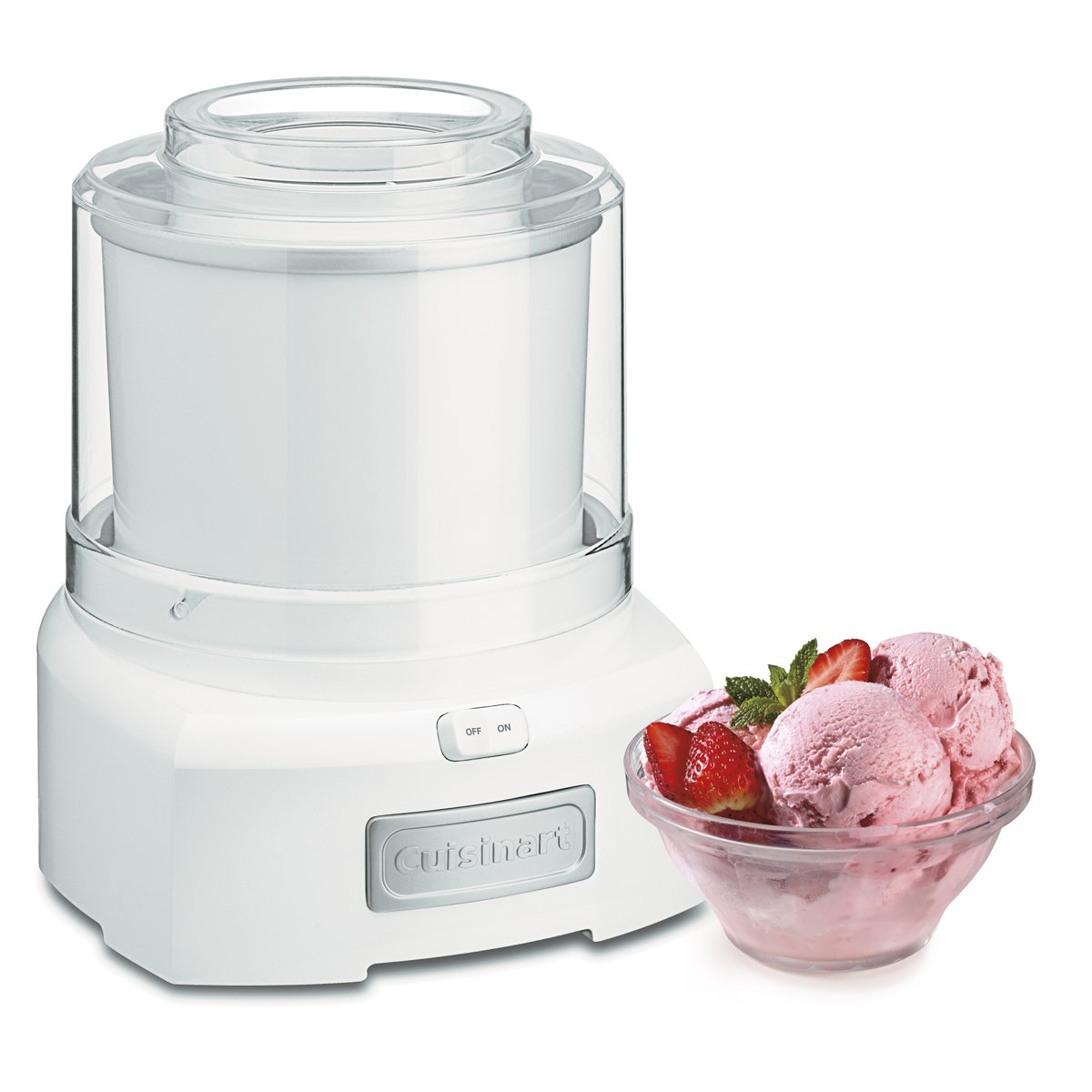 The Best Ice Cream Maker, According to Cook’s Illustrated

Even during updated testing, the folks at Cook’s Illustrated still picked this old favorite. They say the desserts come out consistently creamy and score top marks in their blind taste tests. It’s also lightweight, compact, and has one-button operation (off and on!). Plus, the paddles fully submerge in the ice cream and don’t get in the way of the thermometer, should you want to be scientific about it. Just keep the bowl in the freezer at all times and you’ll be good to go when the craving strikes. 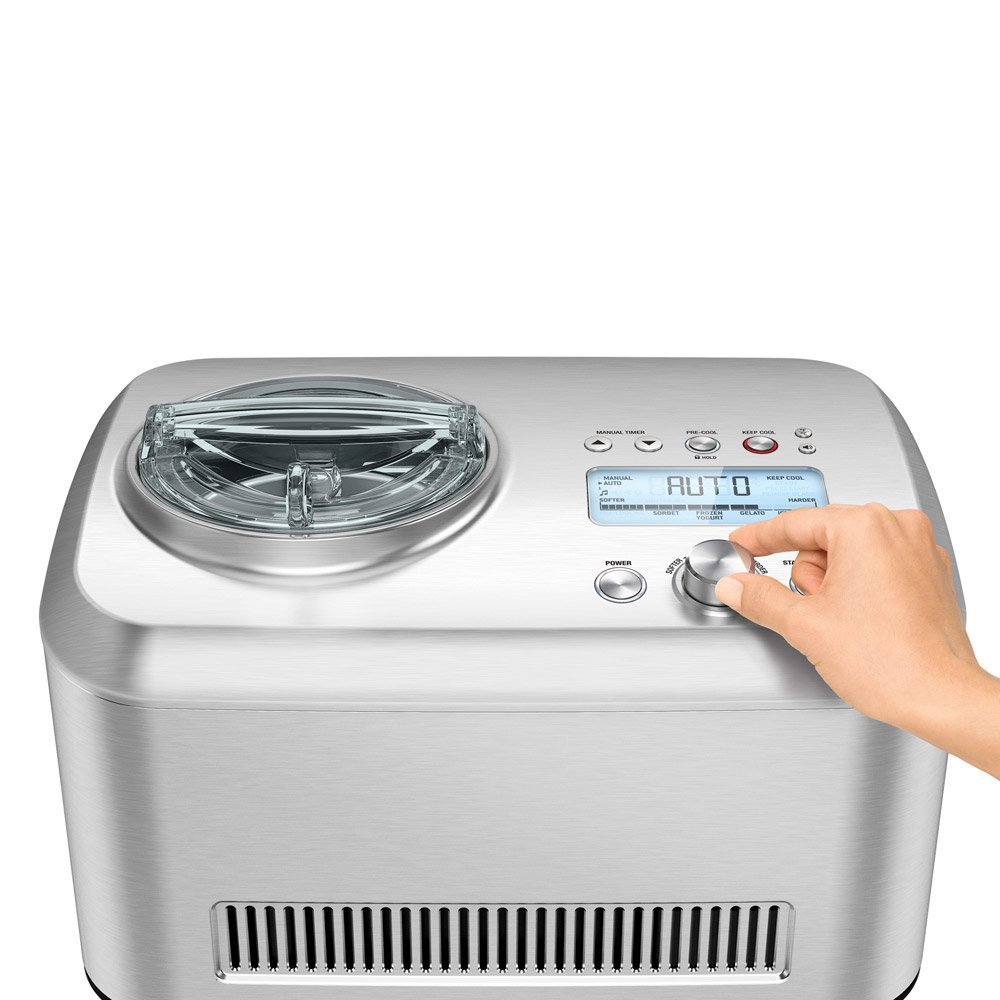 The Best Ice Cream Maker if You’re Willing to Splurge, According to Serious Eats

Serious Eats also picked the Cuisinart Frozen Yogurt, Ice Cream & Sorbet Maker, so we looked at their splurgy pick and they listed this one from Breville. Which is also the runner-up choice from Wirecutter and Cook’s Illustrated, earning the nod for people who are fanatical about their ice cream and want to make consecutive batches. What do you get for the extra money? The self-refrigerating machine has 12 hardness settings and pre-cool and keep-cool options, and it plays classic ice cream truck songs to alert you when your ice cream is ready. 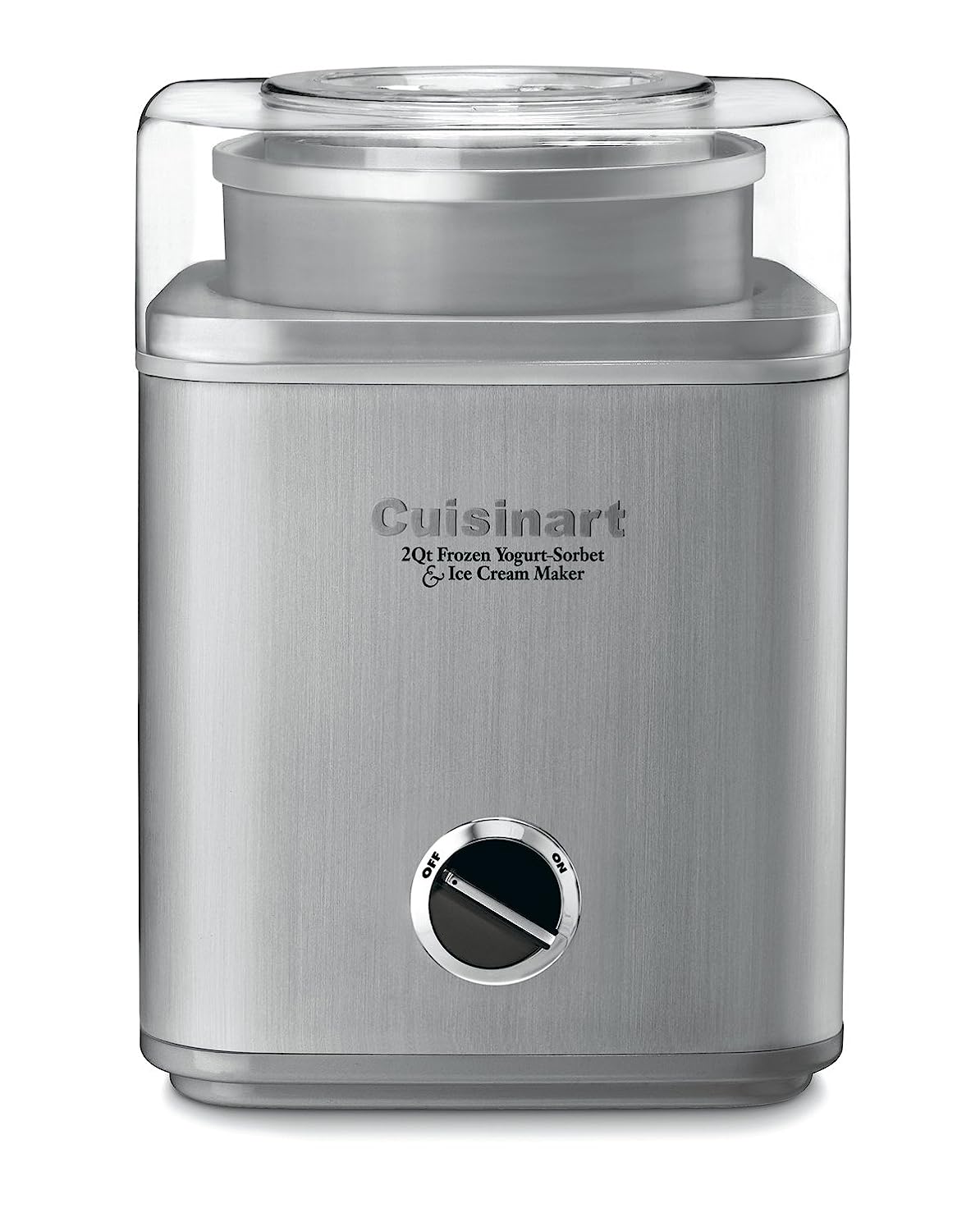 The Best Ice Cream Maker, According to Good Housekeeping

Another option from Cuisinart, this one makes a half-quart more ice cream without taking up much more cabinet space. Good Housekeeping liked it for it’s thick-yet-smooth ice cream, which they said was ready in about 45 minutes (versus the 25 touted on the brand’s website). 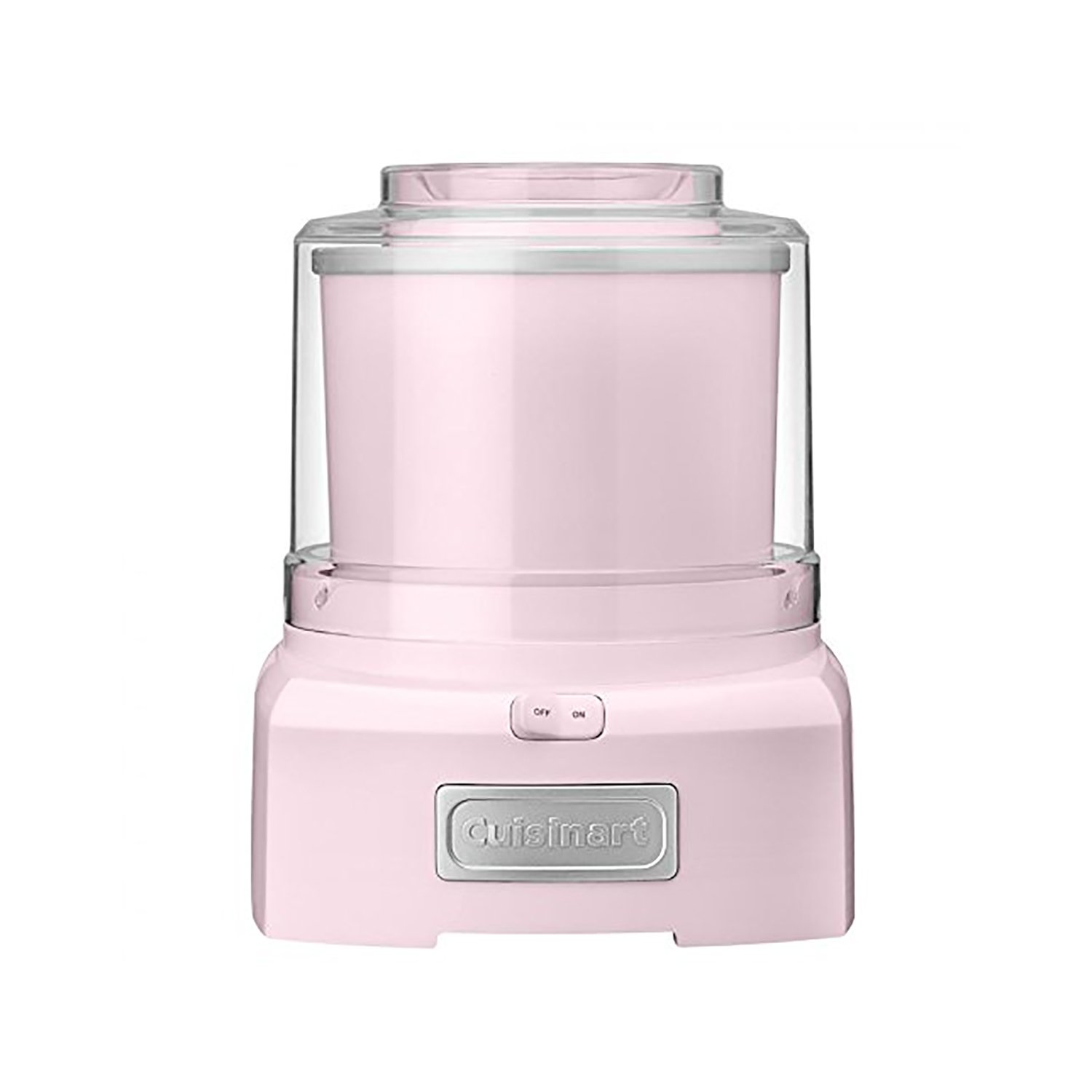 This is the same machine that Serious Eats and Wirecutter picked. It’s just pink instead of white.

You can’t go wrong with any Cuisinart ice cream maker. The company came out with ice cream makers in 1998 and has sold more than six-million machines since then. Our team members have a few different models — and none of them disappoint! We love that most of the machines make ice cream, sorbet, frozen yogurt, and even frozen drinks (margs!). The brand even has the Fruit Scoop, which is the only ice cream maker on the market that can make frozen desserts using fresh fruit. (Other machines and hacks online show you how to make ice cream out of frozen fruit, but this machine works with fresh.) For a basic option, go with this one that’s less than $50.

Related: Why Does Everyone Have a Cuisinart Ice Cream Maker?

If you want something with a little more going on, the Cuisinart Cool Creations Ice Cream Maker is your best bet. “The bowl freezes faster and better than other ice cream machines I’ve used, which is key when you’re making ice cream with little kids,” says Meghan Splawn, associate food editor. “And you can get a spoon in there to taste test without stopping the machine or running into the blades. Another plus for the kiddos.”

Note: We also like the KitchenAid ice cream attachment bowl (pictured at the top of this post) if you already have a stand mixer and don’t really want to add another appliance to your cabinets. It makes up to two quarts of ice cream and works with your stand mixer. Just chill it ahead of time.