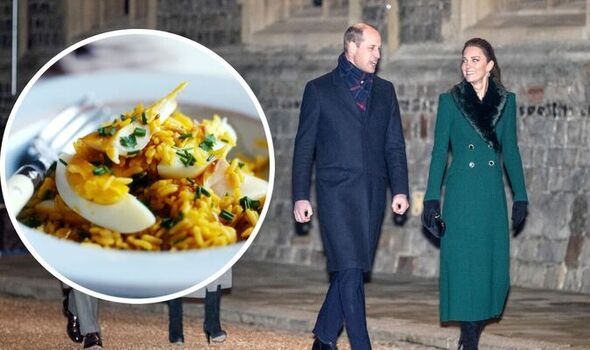 Boxing Day for most Britons is spent relaxing in front of the sofa after overindulging on Christmas Day, but the Royal Family do things a little differently. Boxing Day kicks off with a hearty buffet breakfast according to reports.

Typical dishes include kedgeree, bacon and eggs, according to Hello Magazine. Kedgeree is an old-fashioned breakfast said to be a favourite of the late Queen Elizabeth II.

Flaked fish, rice, and hard-boiled eggs with cream and curry powder make up this royal favourite. It is likely that the Royal Family will continue to serve this Boxing Day dish to honour the memory of Her Late Majesty.

Darren McGrady, who worked at Buckingham Palace from 1982 to 1993, shared the Victorian recipe on his YouTube channel which now has 202,000 subscribers.

Darren said: “One of the most popular breakfast dishes that I cooked for the Royal Family, is a dish called Kedgeree. It’s the ultimate comfort food dish that was brought over to the Victorians in the era of the Raj by the returning British colonials.

“The original dish was made of beans and rice and lentils and by the 19th century in the UK, it became a more sophisticated, classy dish for breakfast and brunch, entertaining with the addition of smoked haddock and boiled eggs.

“For Kedgeree, we have to poach the fish and you can poach in water if you want to, but it’s actually best to poach in milk. Milk has that fat in it and as it’s poaching the fat actually holds onto the flavours that are coming out of the fish, that smokiness that comes out of the fish.”

Darren said in his YouTube video after he had perfected the dish: “Absolutely perfect, and fit for the royal breakfast table.

“First of all, a little more cream, as I just want it all to run together – I told you it was opulent!

Instead of relaxing in front of the telly, the Royal Family have a very active Boxing Day on their vast estate.

The family enjoy a range of country pursuits such as shooting riding and walking. The whole family are expected to attend the traditional Boxing Day pheasant shoot.

However, Kate Middleton and Prince William previously left Sandringham on Boxing Day to visit the Princess of Wales’ family.

Kate is known to be very close to her parents, Carole and Michael Middleton, who live in West Berkshire in a village called Bucklebury.

Prince Harry reportedly skipped the 2018 hunt out of respect for Meghan Markle’s animal-loving principles. Most other senior royals, however, have been known to stay on to attend the hunt.