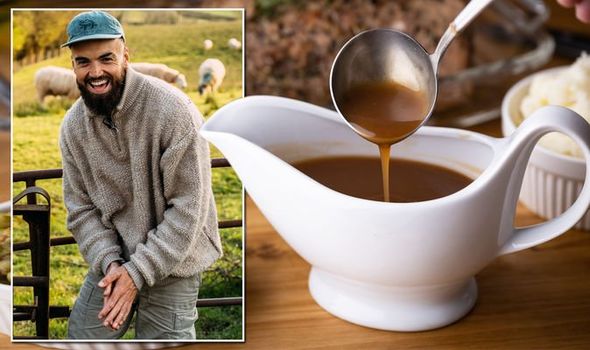 Gaz Oakley is a vegan chef from Cardiff, known as the Avant-Garde Vegan. The cook uses a number of unusual ingredients to perfect a meat-free gravy.

The foodie influencer, who worked in a kitchen from the age of 15, adds red wine to his gravy.

Perhaps more unusual, though, is the addition of coffee to the recipe.

The chef told Express.co.uk: “For me, it’s all about the gravy.

“I like to make mine from scratch, caramelising veg in a pan before deglazing with red wine, soy sauce, herbs, and coffee, which really helps to enrich the flavour.

“My secret ingredient is a dollop of marmite for a bold umami hit.”

Gaz has more details on his website, where he discusses the vegan gravy recipe.

He recommends lots of veg, such as carrots, red onion, chestnut mushrooms, garlic, leek and celery.

The chef adds fresh herbs such as sprigs of thyme, sage, and rosemary.

For the more usual addition of coffee, he details coffee brewed from ground beans is best.

However, he adds that even instant coffee will work.

Gaz also discussed how to create a vegan version of smoked salmon.

The alternative started is made with carrot and miso paste.

He makes the gravy with white wine and cranberries.

However, the BBC cooking show champion’s version is not vegan, like Gaz’s.

Made with juices from the turkey pan, it will perfectly complement your bird.

If your guests are particularly sensitive to sprouts, Kenny also has a tip for a milder flavour.

It all comes down to the sprouts you buy, Kenny told Express.co.uk, as he disclosed his Brussels sprouts recipe.

He said: “Buy younger sprouts if you can, as these have a much more subtle flavour.”

Merchant Gourmet has partnered with Gaz Oakley as part of its ‘Appetite for Change’ campaign – an initiative rooted in helping save the planet, one plant-based meal at a time. For inspiration on how to serve up more meat-free meals made in minutes, head to @MerchantGourmet on Instagram to see Gaz’s latest recipes.