Independence Day marks the date back in 1776 when the Americans broke away from being ruled by us. The Declaration of Independence was signed and sent around, and is now considered an important symbol of the USA. You don’t need to be American or live in the USA to celebrate Independence Day, however.

How about having a barbecue with friends or meeting up for a picnic?

Perhaps you could have a film night watching only American films?

The best thing about that day is the red, white and blue themed parties, with lots of food.

There are plenty of desserts to make to fit the theme. Express.co.uk talks you through a BBC good food Red White and Blue cake recipe. 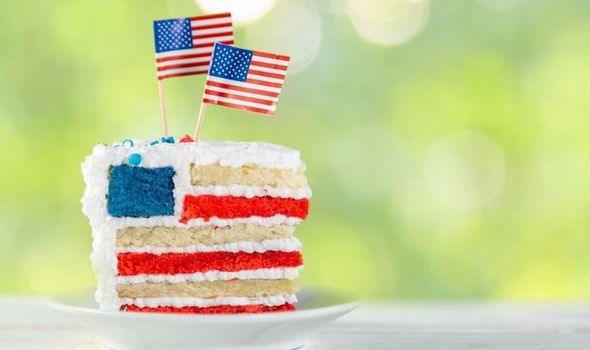 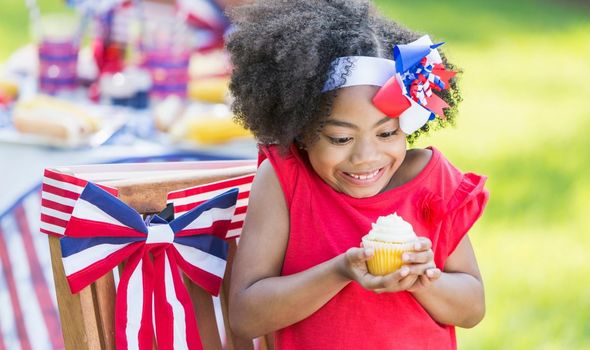 Ingredients for the cake 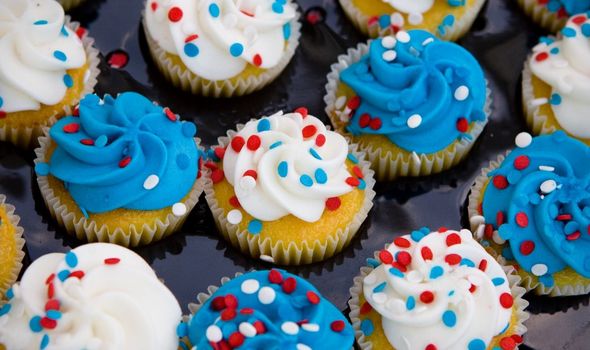 Grease and line the base of three 18cm/7in cake tins with baking paper.

Cream the butter and sugar together in a bowl until pale and fluffy.

Beat in the eggs, a little at a time, and stir in the vanilla extract. Fold in the flour using a large metal spoon, adding a little extra milk if necessary.

Add a few drops of blue colouring into one bowl and mix gently to get an even colour.

Add red food colouring to the other bowl and again mix for an even colour. Leave the third mix plain.

Bake for 20 to 25 minutes, or until golden-brown on top and a skewer inserted into the middle comes out clean.

Remove from the oven and set aside for five minutes, then remove from the tin and peel off the paper. Place onto a wire rack to cool completely.

For the frosting, fill a large bowl with cold water. Pour 100ml/3½fl oz water into a pan and add 250g/9oz caster sugar.

Heat gently and stir until the sugar dissolves, then bring the mixture to the boil.

Use a damp pastry brush to wash down any sugar crystals on the side of the pan.

Boil the mixture rapidly, without stirring it, until it reaches 121C (use a kitchen thermometer for this).

Start this when the sugar temperature of the syrup gets to about 100C. Gradually whisk in the remaining caster sugar.

As soon as the syrup reaches 121C/250F, plunge the base of the pan into the bowl of cold water, to prevent the syrup from getting any hotter.

Only leave the pan in the water for a few seconds or the syrup will get too thick. 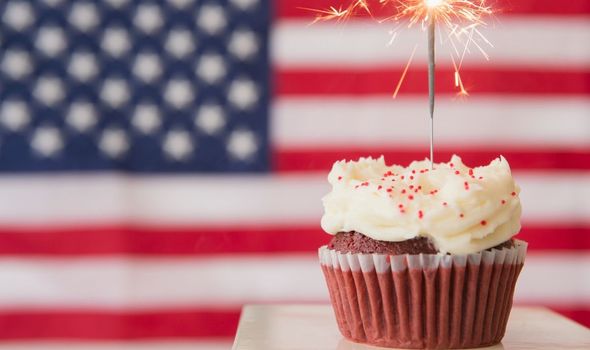 Switch the mixer on full speed and gradually pour in the syrup in a thin stream into the middle of the bowl, trying not to get any syrup onto the sides of the bowl or the whisk, as it will set there and won’t get mixed in properly.

Continue whisking the mixture for about 8-10 minutes until the bowl feels just lukewarm.

If the syrup starts to become too thick to pour, return the pan to the hob very briefly.

Gradually whisk in the butter. Then add the salt and vanilla extract.

The meringue will collapse a little, and the mixture may look like it’s curdled, but keep whisking it until it forms a smooth fluffy buttercream.

Spread the jam over two of the cake layers and top with a layer of frosting. Sandwich the cakes together.

Chill in the fridge for 15 minutes. Remove from the fridge and gently cover the whole of the cake with the frosting.

Sprinkle with decorating sprinkles if desired.