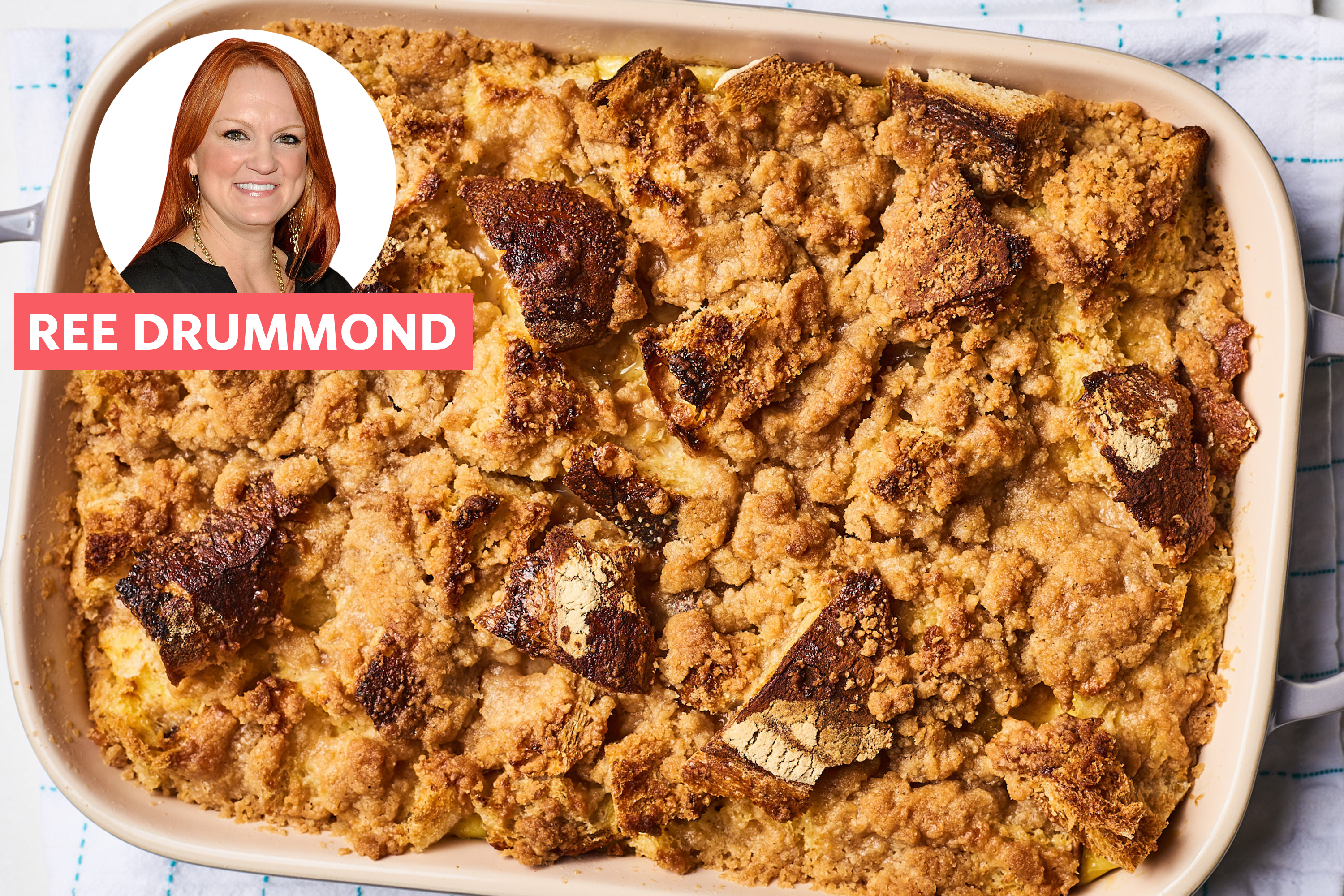 Picture this: It’s Sunday morning and you’re watching the sun rise over the horizon while sitting in your front-porch rocking chair — while the nostalgic flavors of French toast bake in the oven and waft throughout your home. That’s how I imagine Ree Drummond — aka The Pioneer Woman — serves this French toast casserole on her ranch.

Ree’s recipes have an eye for ease and are aimed at feeding a crowd, so I knew her French toast casserole had to be in the running for the breakfast edition of Kitchn’s ongoing recipe showdowns. Ree brings her homestyle approach to the breakfast bake with torn bread, a rich cinnamon-flecked custard, and a crunchy crumb topping. I headed to the kitchen to see where her French toast casserole ranked among the rest. 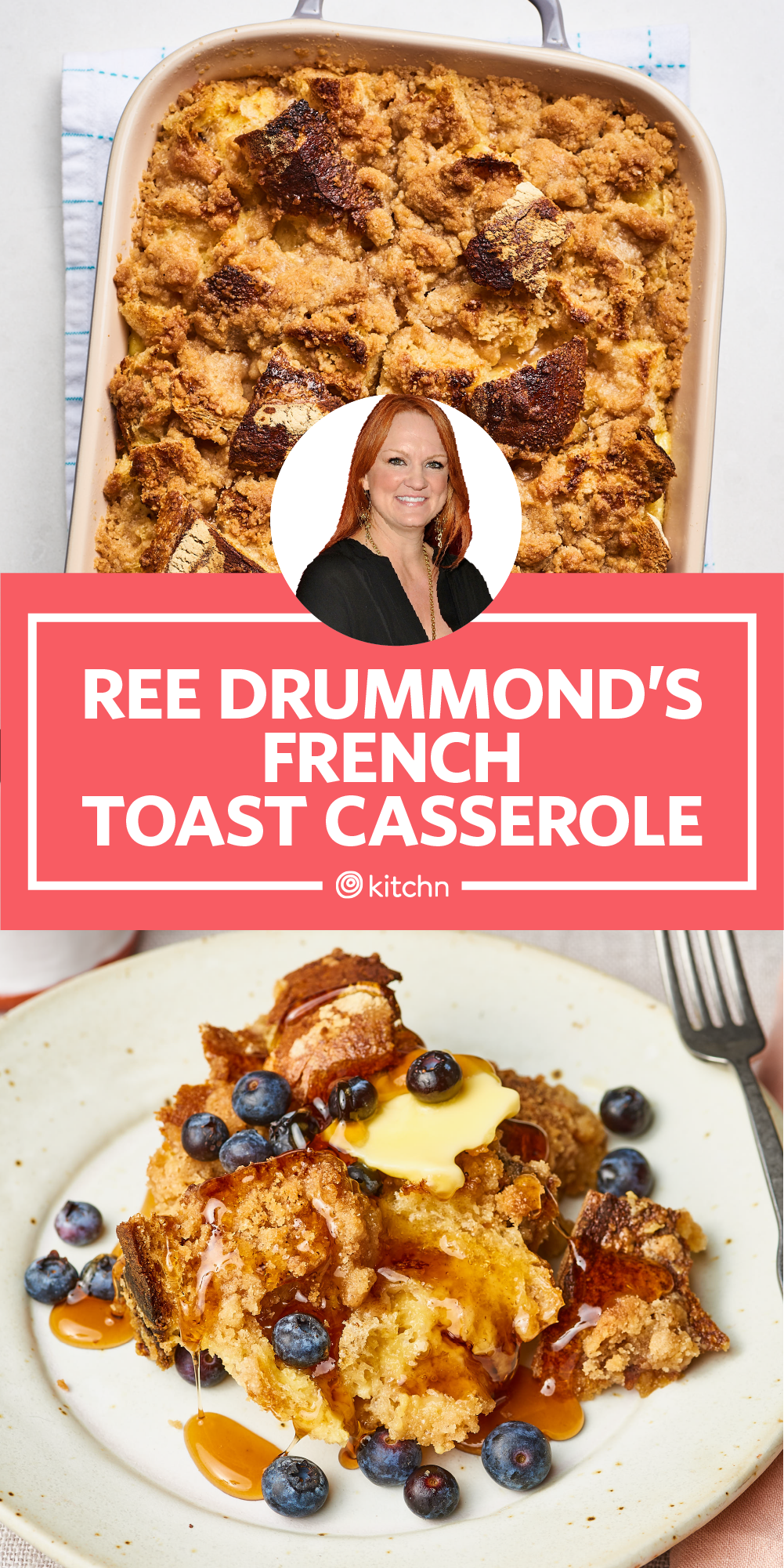 The first step to this French toast casserole is two-fold: choosing the bread and breaking it down to size. Ree suggests using a loaf of crusty sourdough or French bread. (I chose the sourdough since another casserole in the battle, Chrissy Teigen’s, calls for French.) I tore the bread into bite-sized chunks and scattered them into a buttered 9×13-inch baking dish. Then I whisked 8 eggs, whole milk, heavy cream, granulated sugar, brown sugar, and vanilla extract together — then poured that mixture over the bread, and refrigerated overnight.

Separately, I also prepped the topping, combining flour, brown sugar, cinnamon, salt, and fresh nutmeg in a bowl. I cut a stick of butter into the sugar-flour mixture with a pastry cutter until it looked like small pebbles, and stored it in the fridge until ready to bake.

When it comes time to bake, you’ll preheat the oven to 350°F, scatter the topping evenly over the casserole, then bake for 45 minutes to an hour. (Mine was perfect at 50 minutes.) Then scoop onto plates and finish with a pat of butter, syrup, and fresh blueberries.

What I Thought of Ree Drummond’s Baked French Toast Casserole

Of all the French toast bakes I tested, Ree’s came the closest to the classic baked breakfast dish I had in mind. It was the only recipe to suggest sourdough, which added a subtly tangy flavor and chewy texture. Tearing the bread, rather than cubing (mirroring Chrissy’s method) or slicing (as in Ina and Joanna’s recipes) puts more of the bread in contact with the custard, allowing it to absorb more of the liquid and bake up together in the heat of the oven. As a result, this was the easiest casserole to slice and serve.

The cinnamon-spiced custard is rich and well-proportioned to the amount of bread. My main complaint about this recipe is that it’s overly sweet. Many commenters noted that Ree uses half of the granulated sugar called for in the custard in the video posted alongside the recipe. I tested with the amount in the written recipe, but found, as other readers did, that keeping the brown sugar and leaving the granulated sugar out all together might be the best option of all.

Griddled French toast is buttery and crisp on the outside, while at the same time custardy-soft inside. The topping of this casserole plays off that contrast big time with its crunchy crumb topping atop a tender interior. It is a standard crumble topping, similar to what you’d scatter over baked fruit in the summer. Freshly grated nutmeg paired with classic cinnamon adds a touch of sophistication that I really liked. 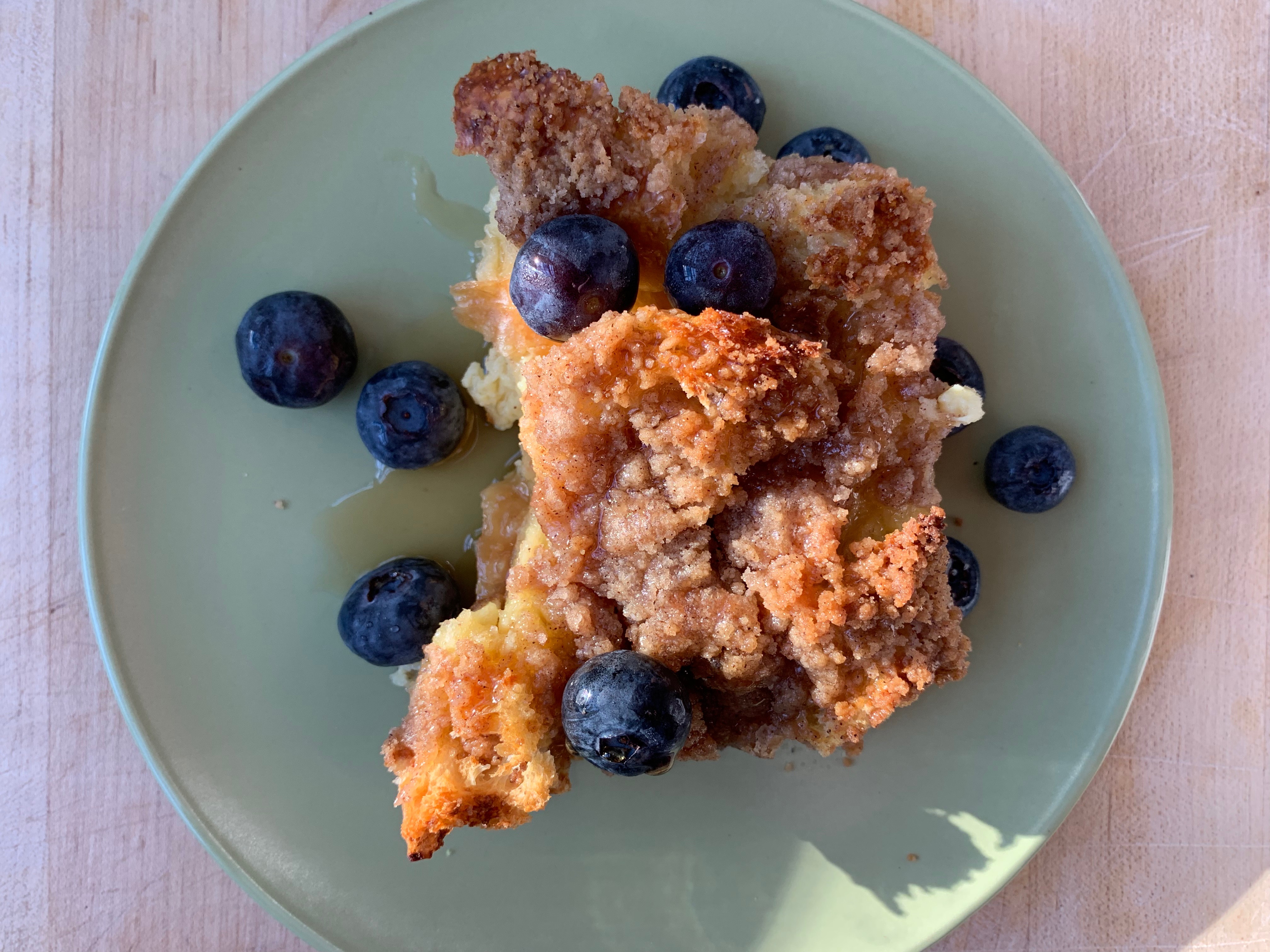 1. Use sourdough and tear it. While not exactly a change to the recipe, follow my lead and buy a sourdough loaf from the bakery. Then, leave the knife in the drawer and instead, hand-tear the bread into pieces that absorb the custard better than sliced or cubed bread. You’ll end up with a softer breakfast bake.

3. Don’t skimp on the blueberries. With a breakfast this sweet, syrup seems redundant but tangy blueberries add a bright and contrasting flavor. Although it’s merely a serving suggestion, Ree must recognize that a sweet bread pudding needs the color and punch that fresh fruit delivers.

With just a few changes to the amount of sugar, and this recipe is a solid choice for a make-ahead baked French toast. The casserole is complete with cinnamon-flecked, custard-drenched bread and a sweet and crunchy topping that (almost!) makes you forget to add syrup.